Once the epicenter of the coronavirus pandemic, New York City began its phased reopening in June. But the impact on local businesses continues to reverberate across the city.

The real estate sector has been particularly hard hit. Manhattan apartment sales in the past quarter saw their biggest decline in 30 years, while renters are vacating en masse.

According to PropertyShark, March 2020 kicked off with sales activity 15% higher than the same period last year, only to see it drop to 36% by the end of the month, and then plummet 61% lower in April. A rebound began in May, putting an end to the slide, with strengthening numbers continuing in June. Nonetheless, price drops that began to hit the market upon the initial lockdown are still in effect. Among the steepest are Trump branded apartments, with cumulative reductions of 25-50% from initial asking price. 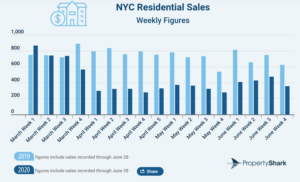 On the rental side, April saw a 71% plunge in new leases from last year, according to Miller Samuel.

NYC’s rental vacancy rate doubled this year, to reach a record high of 3.67%, with available inventory in Manhattan up 85%, Brooklyn up 57% and Queens up 41% from last year. The median rental price of $3,378 is a 4.7% drop from just a month ago, reversing gains from the past two years. In this surreal environment, property owners and landlords are in panic mode and willing to offer big concessions to bring back business.

With the ban on in-person showings now lifted, many prospects have returned to the marketplace, but sales and leases are still stagnant. Buyers and renters now have significant leverage that would have been unheard of at the beginning of the year.

Many of the best apartment deals in New York City are closest to offices that people no longer go to. According to StreetEasy, the Flatiron District had the largest share of reductions with 45% of apartments getting price cuts. The Financial District was next at 42% and Midtown West next at 40%.

“The bargains are concentrated in neighborhoods where many residents left the city during the pandemic lockdown,” says Nancy Wu, an economist with StreetEasy. “Those areas in close proximity to Manhattan’s prime office towers aren’t as appealing to renters now, while people work from home and no longer worry about commute times.”

As the market adjusts, deals vary widely with little consensus on what it will take to turn things around. As a buyer or renter, your best bet is to work with an experienced agent who knows where the best deals are.

For more information on buying, selling or renting in the current market, please contact Batra Group at (646) 202-1877.